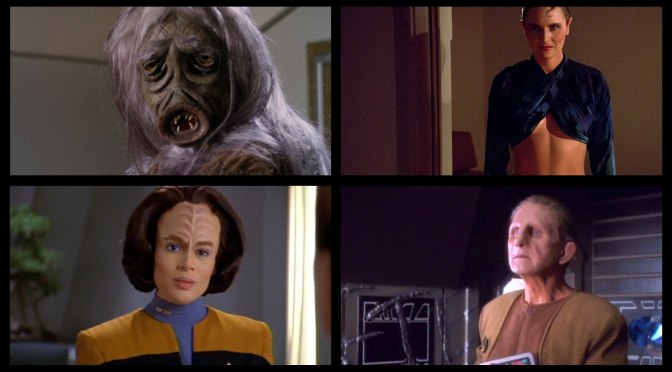 With every Star Trek pilot episode reviewed in the 1st episode of HER FIRST TREK, Katie moves on to the 2nd episode of each Star Trek show. This week, she talks time travel, murder mysteries, sex, salt vampires, and Jimmy Saville. With myself, Kyle West.

Hit play, or search for “Her First Trek” on your podcast app of choice!

Produced by Nerd Since ’86.

What’s in this episode?

This made Kyle sad.

Kyle asked Katie what her favourite opening sequence to a Star Trek show, now that she’d seen them all. She said Enterprise.

Kyle joked that they’d just angered a majority of the Star Trek fanbase.

After Katie wasn’t enamoured with the character of Benjamin Sisko, in the last episode, Kyle panicked.

The day after recording that episode, he searched for memes of Sisko that he could show her to prove that Sisko would become awesome as the show goes on.

He said that it sent him down a rabbit hole of Star Trek memes.

Katie chose to start with Star Trek: Voyager, this week.

They described the plot of the episode, using TrekCore.com for reference.

Katie was horrified that she understood some of the technobabble in the episode summary.

Kyle joked that he wished listeners could see Katie’s “physical performance”, as she reads out episode summaries.

They joked that the time travel aspect of “Parallax” threw them off, a bit.

Despite that, Katie enjoyed the twist that Voyager was seeing themselves in the nebula.

“She’s so direct, but not a nasty, cold bitch,” said Katie, when praising the character.

Listing all the Star Trek shows that now have female leads, Kyle spoke of how for being the first ever Trek female lead, Janeway isn’t written as a typical female TV character, but instead just a strong authority figure (that’s a good thing!).

Both thought that Kate Mulgrew had been awesome, in these first two episodes.

As a fan of rules, Katie wasn’t supportive of B’Elanna’s campaign to become Chief Engineer.

She felt different, after the scene where B’Elanna and Janeway click on a knowledge level.

Katie predicted that Torres would have trouble following the rules in the future, despite her new position.

They enjoyed the plotline with The Doctor.

Kyle appreciates that there’s a long-term character storyline already in play, with regards to people ignoring The Doctor.

What Pissed Kyle Off?

He was incredibly mad at how Janeway brushed off Tom Paris’ very reasonable confusion about the temporal issue faced in this episode.

Katie didn’t enjoy this episode as much as the first Voyager episode, “Caretaker”.

She Loves a Murder Mystery

Before they discussed DS9’s “A Man Alone” in detail, Katie admitted that she really liked the episode.

She likes murder mysteries, and didn’t see the outcome coming, in this one.

They wondered if Sisko waited too long to take Odo off the investigation, given he was a prime suspect.

Kyle said that, in situations like that, Sisko should have removed Odo from the situation immediately.

Katie finds the Sisko/Dax relationship weird, as he was friends with her previous host (an old man), but “clearly” has sexual tension with Jadzia.

She thinks he has more onscreen sexual chemistry with Jadzia, than he had with his own wife, in the previous episode.

Both agreed that Dr. Bashir is, perhaps unintentionally, coming off as very creepy and weird in his attempts to woo Jadzia.

Katie said that he should’ve taken no as an answer from her, and moved on.

She named him Creepy Guy, as she couldn’t remember his name.

Kyle said that, by the end of the entire series, Bashir is one of his favourite Star Trek characters.

Despite that, she thoroughly enjoyed this episode, compared to that previous one.

She also enjoyed the storyline that saw Keiko open a school.

After Katie said that she enjoyed The Next Generation’s “The Naked Now”, Kyle was baffled that of all the shows to have struck a chord with her, it was TNG’s first season.

He said that he is always worried when he puts on one of these episodes for her, as he expects her to hate it, but somehow she loves them.

She Must Have Had a Wax Job

Kyle stated that, given how low her sexy costume went, Denise Crosby must’ve had to have a complete wax of her private area.

They found all of Tasha’s scenes to be funny, especially at the end of the episode, when she tackled “the morning after” with Data.

Kyle wondered if Data had the capability to record his sexual encounter with Tasha.

“That is grim”, Katie responded.

They agreed that the sexually-charged scene between Picard and Beverly, in Picard’s Ready Room, was hilarious for all the wrong reasons.

Although he loves Patrick Stewart, Kyle called his acting awful in this scene. “Hammy” got used.

She Was Not Looking Forward To This

Kyle spoke of how Katie was not looking forward to watching another episode of Star Trek: The Original Series.

She agreed that the pacing was one of the hardest parts for her to enjoy. The acting techniques, with long delayed reactions to everything, had also been frustrating for her.

People on social media are starting to accept that TOS can be a difficult show to watch for the first time now, Kyle told her.

Katie gave a recap of the plot for “The Man Trap”, surprisingly full of positive energy.

She said this episode was “much better” than the last episode.

Why Didn’t She Suck On McCoy?

Neither of them understood why the villain didn’t kill McCoy, given she wasn’t the woman who she was pretending to be.

The fact that she killed the fake husband so happily, but not McCoy, confused them, too.

Kyle had a problem with Spock quickly suggesting they kill the episode villain, particularly as he’d quickly made the same decision over Gary Mitchell in the episode before.

Katie had no problem with it, said it was logical.

He agreed, but said that as a Starfleet officer, it shouldn’t be Spock’s go-to option.

Did Kyle F Up?

Kyle asked if he made a mistake, showing her “Where No Man Has Gone Before” before “The Man Trap”, given she was unimpressed by the former, but enjoyed the latter.

She said that he did not, and that she preferred the increase in episode quality, opposed to seeing the quality drop had she seen them the other way around.

Katie confirmed that she is “feeling okay”, about her Trek journey, thus far.

In two weeks, Kyle said, they would be watching one episode from each of the shows again.

Katie was looking forward to the DS9 one, simply because she wasn’t feeling the bajorans, so needed this Bajoran episode to help her warm up to them.